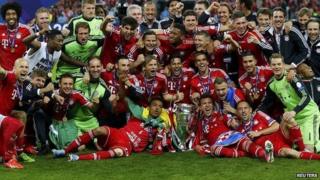 Bayern Munich have taken the top prize in European football after beating Borussia Dortmund 2-1 in the Champions League final.

Bayern had lost two finals in three years, including a defeat on penalties to Chelsea in their own Allianz Arena 12 months ago.

But this year they cast off the tag of losers to claim the crown for the fifth time.

It was the first time that the two German teams have gone head to head in a European final.