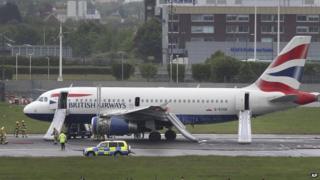 A plane has made an emergency landing at Heathrow airport in London, but no one was hurt.

The British Airways flight was flying to Norway, when it had to turn around and land back at the airport it had just left.

Two runways were closed at Heathrow - one of the busiest airports in the world - as fire fighters hosed down the plane.

Passengers were quickly evacuated from the plane by inflatable slides.

British Airways have said the plane had to land because of technical problems. 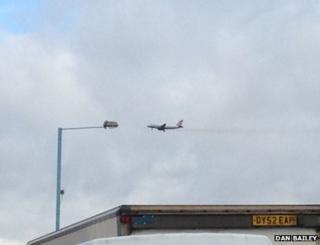 People on the ground reported seeing smoke coming from the plane

People onboard and on the ground have reported seeing large amounts of smoke pouring out of the plane.

Some even said they had seen flames near the engine.

Rob Brownell was in London at the time, when he looked up to the sky after hearing a loud noise.

He said: "There was this almighty rumbling overhead - I looked up and saw the plane on fire. There were flames coming not just from the engine but lapping the wing".

The plane was carrying 75 passengers, and BA said it would launch a investigation to try and work out what had happened.