Chimney taken apart after boy falls down it 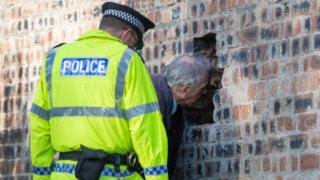 A boy in Scotland has been rescued after he mysteriously got trapped inside a chimney.

Firefighters had to take the 6 metre tall chimney apart brick by brick after the 14-year-old was discovered inside.

It's not known how the boy got wedged inside in the county of South Lanarkshire.

When he was rescued, he wasn't badly hurt, but rescuers discovered the only way to get to him would be to take the whole chimney apart!