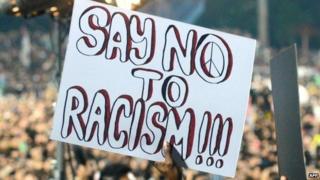 The European Football Association, UEFA, have announced punishments for players who are racist on the field.

The organisation said there will be a minimum 10 match ban for racism by players in their competitions.

UEFA also said spectators will be punished for any racist offences - this could mean partial closure of a stadium or even full closure. The club will also end up with a fine of up to 50,000 Euros.