Venezuela has run out of toilet roll 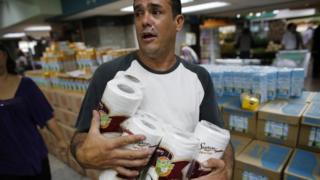 The Government in Venezuela has had to buy an emergency supply of toilet roll because it's running out.

The South American country's National Assembly has agreed to ship in 36 million rolls of toilet paper, and other products such as toothpaste and soap, which are also in short supply.

Venezuelans are used to shortages, and they often go without sugar, flour or butter - in fact, economists say the shortages affect around 20 percent of goods.

Venezuela is an oil-rich country, and it has the world's largest proven oil reserves, but many Venezuelans are very poor and inflation rates are very high.

Economists say this is because the country's wealth depends on world oil prices, and some suggest government policies have had a bad effect on the economy.

The government says the toilet paper shortages, like others, are the results of panic buying, and it says there must be groups of people buying and hoarding the products so they can sell them at high prices.

But some people say the shortages are because there are strict price controls and restrictions on imported goods.