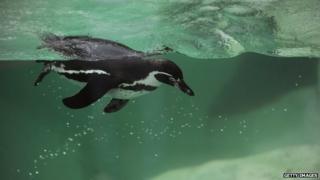 Researchers think they have solved the puzzle of why penguins don't fly.

The team of experts, including scientists from the University of Aberdeen in Scotland, came up with a theory by studying both penguins and guillemots.

The species are closely related, and both can dive really well, but only the guillemot can take to the skies.

So the researchers studied the wings of both and found that wings that are good for flying are not as good at diving.

They said it is the same the other way round too, so penguins' wings which make them excellent divers are the reason they cannot fly. 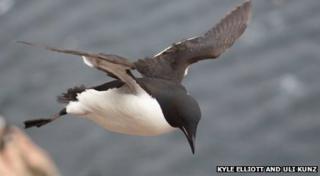 The guillemot is able to fly - just. The researchers found it used so much energy to flap its short wings, they were surprised it could stay aloft

So why can guillemots both fly and dive? Well, the team found that the guillemots needed more energy than any other bird when it was flying, but not very much to dive.

They say this shows that penguins, being bigger and better divers would need to use even more energy than the guillemots if they were to try flying - so this is the reason they don't.