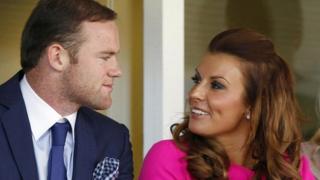 Coleen and Wayne Rooney are celebrating the arrival of a baby boy.

She wrote "we're all so happy and doing well".

The United striker also announced the birth on Twitter, writing that "both Klay and Coleen are fine [and] we're all delighted".

Klay has an older brother called Kai; he was born in November 2009, and is three years old now.

Rooney missed Manchester United's last game of the season against West Bromwich Albion on Sunday to be with his wife.