The new Xbox One has been revealed at an event in Washington, USA.

Microsoft described the new box as an "all-in-one" system which can play games, live TV, movies and music.

Kinect included with every Xbox

The new console comes with Kinect motion control included as standard. Kinect has seen a major upgrade in this version.

The Xbox One knows if you're looking at it, can see each finger on your hands, works in the dark and can measure your heart rate just by looking at you!

The console can also respond to voice commands and can tell who is speaking even if you're playing a noisy game.

Don Mattrick from Microsoft said: "We're going to bring people things that they love. It's going to be the best in gaming and the best in entertainment."

The Xbox One has a Blu-ray drive to play movies - but any games you buy have to be copied from the disc to the built-in memory before you can play.

If you lend or sell your disc to somebody else, your copy of the game on your Xbox One will stop working.

[Microsoft changed their mind about this in June 2013]

The new Xbox One also won't be able to play any games designed for the Xbox 360.

Players can now record themselves playing games, edit the video, and upload it straight to the internet. 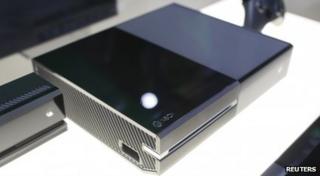 The Xbox One can show two apps on screen at once

The Xbox One can also run two apps at once - so you can make video calls at the same time as playing a game.

Microsoft says the Xbox One does not need to be connected to the internet all the time - but some games will need internet access to work.

The console will go on sale later this year and Microsoft have not announced a price yet.