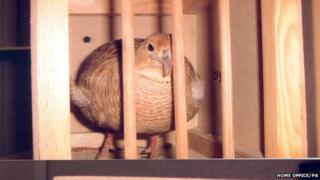 Fighting birds from South Asia have been discovered hidden in suitcases at Leeds Bradford Airport.

The smugglers tried to sneak the birds past customs on two different occasions.

Staff at the airport said they had not seen anything like it before.

"Our officers are trained to expect the unexpected, but were surprised when they realised just what the passengers were smuggling."

"It is vitally important that unregulated attempts to bring livestock into the UK are stopped, to protect the health of both animals and humans and to prevent animal cruelty."