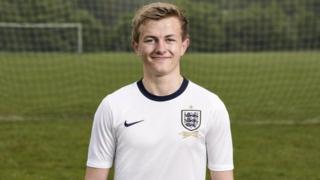 Jack Wilshere has unveiled the new England kit by tweeting a picture of it.

England and Arsenal midfielder Wilshere put out the picture of the kit being worn by a student at his old school.

The team are set to wear it for the first time when they play against the Republic of Ireland on 29 May.

It is designed by American sports company Nike, who won the contract to produce the kit last year.

They took over from Umbro, the company that has designed the kits since 1954.

Wilshere tweeted: "Like this kid, my England dream began here, so he was first in #theshirt - England's new kit from @NikeFootball".