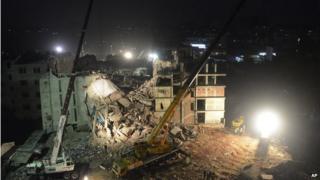 Hundreds of clothing factories have reopened in Bangladesh today.

They were closed down following the collapse of a factory complex that killed 1,127 people.

The incident, which happened three weeks ago, has been described as one of the world's worst ever industrial disasters.

Since then workers have held several demonstrations - angry at the poor safety conditions many are forced to work under.

Campaigners from across the world have signed petitions calling for the clothing companies that have factories there to promise to improve standards.

Earlier this week, several British companies who make clothes in Bangladesh - like Tesco and Primark - said they'd sign up to an agreement committing them to better safety standards.