Bieber must pay for thousands for monkey stay 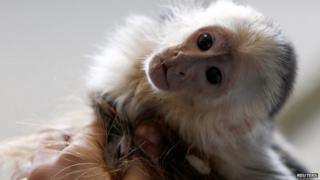 Officials in Germany say Justin Bieber owes them thousands of pounds for his monkey's two month stay at a Munich animal shelter.

A spokesman for Munich's customs office says the cost of care, food and vet visits for Mally is was very high.

Bieber has been told he has until midnight on Friday to claim the monkey.

Mally was seized by authorities on March 28 when the singer failed to produce the proper papers after landing in Munich on tour.

The shelter says his management company has asked that the 20-week-old monkey be placed in a zoo.

But officials have yet to receive a formal request for that from Bieber.