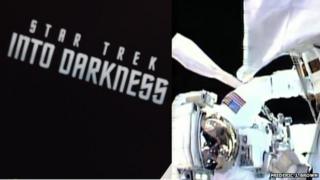 The crew of the International Space Station have boldly gone where no one has gone before - to see the new Star Trek film while in space!

Three astronauts there were offered a sneak peak of ``Star Trek Into Darkness'' days before it opened on Thursday back on Earth, seeing it not in 3-D, but Zero-G! (Zero gravity - geddit?!)

NASA spokesman, Kelly Humphries, said the movie was beamed up to the outpost on Monday, and the crew got to take the day off on Tuesday.

Let's hope they liked it - U.S. astronaut, Chris Cassidy, is taking part in a web chat with the stars of the film: Chris Pine, Alice Eve and John Cho, and its director and screenwriter this week.

Tell us your most amazing wildlife spotting moment

What are the new emojis all about?