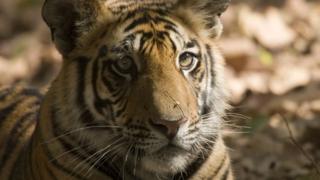 Scientists say tigers in India could become extinct because of a lack of diversity in the DNA of the breed.

It's estimated there are now fewer than 2,000 tigers in the whole world, and experts think 60% of those are in India.

Since then numbers have dwindled, mainly because they used to be hunted by British officials and Indian royalty.

Since then though, despite conservationists' efforts to change culture and protect the species, the numbers have continued to drop.

Prof Bruford of the Cardiff School of Biosciences has been leading the research, he said there are now several other factors that are causing the threat of extinction.

He explained that 'a loss of habitat... meaning lower population sizes, means their gene pool is no longer mixing across the subcontinent."

This he says causes the problem of 'inbreeding' because the tigers that are grouped together are now more likely to share the same genes.

Mr Bruford said: "This is important because tigers, like all other species, need genetic diversity to survive - especially under climate change - so what diversity remains needs to be managed properly so that the Indian tiger does not become inbred, and retains its capacity to adapt."