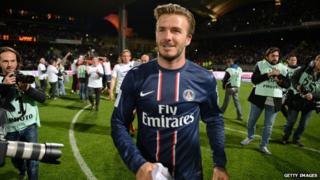 David Beckham says he will retire from professional football at the end of the season.

He has played for some of the biggest clubs in the world including: Manchester United, Real Madrid and AC Milan.

Beckham said: "I'm thankful to PSG for giving me the opportunity to continue but I feel now is the right time to finish my career."

The 38-year-old joined Manchester United as a 14-year-old and made 398 appearances, winning six Premier League titles and the Champions League.

He moved to Real Madrid in 2003, winning the La Liga title in 2007 before a switch to the United States with LA Galaxy.