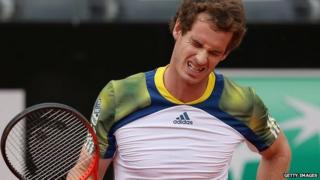 Tennis ace Andy Murray had a miserable 26th birthday as he retired from his Italian Open second-round tie against Marcel Granollers, with a hip injury.

The Scot looked troubled throughout and now faces a big battle to be fit for the French Open on 26 May.

Spain's Granollers won 6-3 in the first set, and led 2-1 in the second before Murray needed treatment.

The British star battled back to win the second set 7-6.

But he then retired hurt before the deciding set, meaning Granollers, ranked 37th in the world, won.

Strangely, the Scot's only previous mid-match retirement also came on his birthday - when he snapped a tendon in his wrist in the 2007 Hamburg Masters.

Earlier on Wednesday, Murray's fellow Brit Laura Robson was knocked out of the tournament, by Serena Williams.