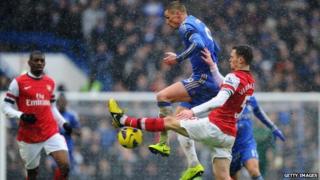 The Premier League has confirmed there will be a third-place play-off match between Chelsea and Arsenal if both teams end the season with identical records.

If Chelsea draw 0-0 on the final day of the season and Arsenal win 2-1, they will be level on points, goal difference and goals scored.

"It would be played at a neutral ground," a spokesman said.

Chelsea, who are currently third and two points ahead of Arsenal, host Everton at Stamford Bridge on Sunday, while the Gunners travel to Newcastle.

The teams who finish in the top three of the Premier League automatically qualify for next season's Champions League group stage. The fourth-placed club enters the competition's third qualifying round.