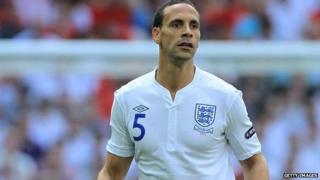 Rio won 81 caps for his country, but hasn't played for the three lions since 2011.

"After a great deal of thought, I have decided the time is right to retire from international football," he said.

"I have always been very proud to play for England. I would like to wish Roy and the team all the best for future tournaments." he added.

England manager Roy Hodgson praised Ferdinand's record, saying: "To have captained his country, and to play at three World Cups, marks him out among a very special group of players."