Robson knocked out of Italian Open by Serena Williams 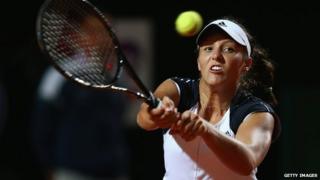 Britain's Laura Robson has lost her first ever match against world number one Serena Williams 6-2 6-2 in the second round of the Italian Open.

Robson had beaten the American's sister Venus in round one, but didn't serve as well against Serena, making eight double faults.

The defeat is a blow to the 19-year-old's hopes of being among the 32 top ranked players at the French Open.

Serena Williams will play Melanie Oudin or Dominika Cibulkova in round three.

"I felt like I had a couple of chances that I didn't take, especially on those break points," Robson said after the match.

"But in a way you expect her to hit an unbelievable shot all the time, and when she doesn't you're not ready for it. But there's definitely a lot of things I can take out of it."