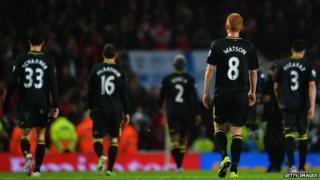 Wigan Athletic have been relegated from the Premier League just days after winning the FA Cup.

The team were beaten 4-1 by Arsenal at the Emirates Stadium in a must-win game.

Arsenal's victory puts them a step closer to a place in the Champions League.

But for Wigan, it's the end of eight seasons in the top flight of English football. 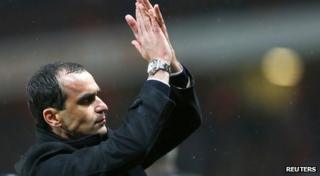 All the pre-match debate was about how well Wigan could recover from their historic FA Cup win over Manchester City just three days earlier, but manager Roberto Martinez picked the same starting line-up at the Emirates Stadium.

It was clear from early on that there were some tired legs on the pitch and Arsenal were keen to take advantage of that, with goals from Theo Walcott, Aaron Ramsey and two from Lukas Podolski.

"We will keep defying the odds, keep moving forward and make sure this football club has an incredibly bright future," he said.

But when asked about his future at the club, he answered: "This is not the time for that."