Astronauts: What are the effects of space travel on the human body?

The last few months have been an especially exciting and busy time for space travel and exploration.

After more than thirty years of planning, the world's largest and most powerful telescope, the James Webb telescope, left Earth on Christmas Day on its mission to replace to the famous Hubble telescope in space.

But have you ever wondered what the effects of space travel are on the human body? Carry on reading to find out!

Want to know more about space?

Our spectacular guide to stargazing in 2022

Search starts for astronauts of the future

What happens to the human body in space?

Space affects almost every part of the human body.

That's because there is less gravity to create the conditions we experience living on Earth.

The American space agency, Nasa, has spent more than 50 years studying what happens to the human body, with engineers using the the lessons learned to better design spacecraft and improve the fit and functions of spacesuits.

Russian cosmonaut Valeri Polyakov spent 437 days on the Mir space station from 1994 and 1995 and still holds the record for the longest time anyone has ever stayed in space!

Understanding the effects of spaceflight on humans is more important than ever, as scientists plan to send astronauts on longer missions to the Moon and Mars.

Here's what we know so far, as well as some ways that astronauts protect themselves when they're in space. 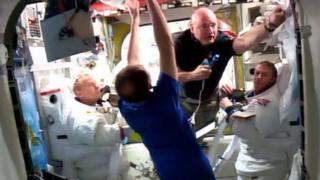 "Astronauts lose a lot of calcium essential to their bones - it's a bit like osteoporosis here on Earth," says space scientist Dr Maggie Aderin-Pocock from University College London.

Osteoporosis is a disease where bones become more brittle, which sometimes affects older people and women. It can mean you're more likely to break your bones.

It's thought that this happens in space because astronauts don't do load-bearing exercise - like walking and running, or lifting things - pulling against the Earth's gravity.

To try to avoid this, while they're in space astronauts have a special diet and have to do up to two hours of exercise per day.

Muscles and bone waste away 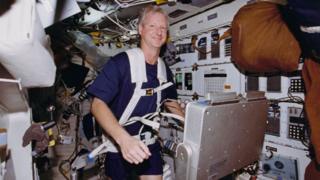 Getty Images
Astronauts need to exercise for two hours a day when in space, like on this special treadmill

After five months in orbit above the Earth, an astronaut would typically lose as much as 40% of muscle and 12% of bone mass, says Jeremy Curtis from the UK Space Agency.

"The muscle loss is the equivalent of a 20-year-old turning into a 60-year-old over a period of three months," he says.

Astronauts returning to Earth will experience problems standing up and balancing - and some won't be able to drive a car to begin with.

365 - the number of days it takes your bones to recover

460 - kilometres distance between Earth and the International Space Station

They have to undergo a special rehabilitation programme a year after returning to earth to rebuild muscles and bones - and may never regain their previous bone mass.

The exposure to higher levels of radiation in space also means astronauts may be more likely to suffer from cancer later on in life.

But on the plus side, scientists say studying the effects of space flight on the human body can help with developing new treatments for diseases like osteoporosis and cancer here on Earth. 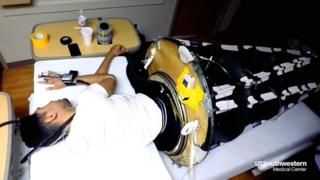 Did you know that squashed eyeballs were a big problem for astronauts?

It may sound weird but many astronauts come back from space with worse vision than when they left.

High pressure in zero-gravity has also lead to some astronauts struggling to read and even conduct experiments while in space.

Now Nasa is designing special sleeping bags to try and avoid it.

The idea is for the bags to suck liquid from an astronaut's head down to their feet, in order to avoid eye problems developing on long missions. 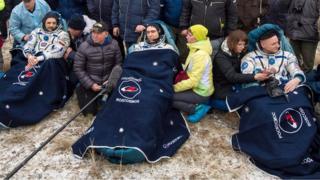 Astronauts are known to experience "space anaemia" - a lack of red blood cells - while on space missions, but until now it was thought to be temporary.

Dr Guy Trudel from the University of Ottawa, who led a study of 14 astronauts explained, "As long as you are in space, you are destroying more blood cells than you are making."

"Having fewer red blood cells in space is not a problem when your body is weightless."

"But after landing on Earth, and potentially on other planets, anaemia could affect astronauts' energy, endurance and strength," he added.

The study found astronauts' bodies destroyed 3 million red blood cells per second during their six-month missions - so dealing with that is something Nasa are thinking hard about.

Would you like to become an astronaut or go into space? Let us know in the comments below!