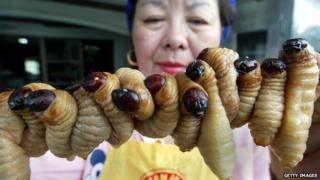 How do you like the sound of lunching on locusts, gorging on grasshoppers or even dining on dung beetles?

Well the United Nations, an international organisation that works to tackle some of the world's big problems, is saying more of us should start tucking into bugs.

In a new report it claims eating insects could help fight world hunger and reduce pollution.

More than 2 billion people worldwide already eat bugs as part of their diet.

"Insects are everywhere - they reproduce quickly, have high growth and feed conversion rates, and a low environmental footprint," say the experts.

Recipe: Stefan Gates shows you how to make mealworm Bolognese!

But wasps, beetles and other insects are currently not used enough as food for people and livestock, the report reads.

Insects are nutritious, with high protein, fat and minerals.

They are "particularly important as a food supplement for undernourished children", the UN says.

The report suggests that the food industry could help in "raising the status of insects" by including them in new recipes and adding them to restaurant menus.

"Me and Mum would eat bugs because of the amount of protein and basic healthiness. But wouldn't we have to be careful because if everyone started eating bugs, birds could die out because that's their food too?"

"I have had barbequed mealworm before. It's like eating crisps. Insects are really tasty - try them!"

"I went to Thailand and ate bugs like wasps and grasshoppers. LOVELY!"

"I wouldn't ever eat bugs, because you don't know where those insects have been and what kind of harmful bacteria could be on them. It sounds gross!"

"Unless I haven't eaten for a year I refuse to eat poor insects. What have they ever done to us?"

"I've had bugs before - they're nice. I had grasshoppers and meal worms - they're a bit dry, but the ones I had were barbecued flavour!"

"Sounds great! Where do you get them?!"

"What's wrong with a burger and chips?"

"I would love to try insects for breakfast, lunch and dinner if it would help world hunger, plus you never know whether you like it unless you try it."

"Less than half our class said they would try eating an insect. Some pupils were worried about insects being dirty."

"I think that's very cruel to the bugs."

"NO WAY! That's disgusting, I would rather eat brussel sprouts and that's not normal for me. But I guess if there was no more food left I might end up eating them."

"We think people should stop eating insects as one of them could carry a disease and you could get infected!"

"We think that they should introduce bugs into our diets, but maybe start using them as an ingredient first so we can get used to them. Programs like 'I'm a Celebrity' makes people grossed out by eating bugs."

"We voted as a class - most of us would eat insects knowing now that they are healthy for us. A quarter of the class thought otherwise...and not dung beetles because dung beetles eat...well...dung."

"I think I would try insects because they look tasty when they are cooked."

"I would never try insects because you don't know where they have been or how dirty they are from being on the ground."

"I would love to try eating insects because it would help the environment."

"I once tried crab and I thought I wouldn't like it, but I did! So I would try insects for sure!"

"If we had no food I would try them, but I wouldn't normally."

"I would try them because I love trying new things."

"I would probably eat a cooked mealworm as I have always wanted to experiment with insect eating."

"I don't think I would ever eat an insect but maybe other people would like to eat them. It's a good idea for tackling the world's problems."

"Some insects are very good for us so I would eat insects quite happily."

"I don't see why not. Insects are kind of like shellfish from land, seeing as they have a high level of protein and other goodies. I've tried Grasshopper and fried Chickadees - they're especially good when fried in olive-oil, and with a bit of lettuce. They're quite tasty - like chicken."

"Over half of us would try it, but only the crispy ones."

"The thought of eating insets makes our stomach turn, it sounds revolting. Despite saying that it will help the world's hunger, the insects might become extinct."

"Our class is mixed - some are worried that if we eat insects then the birds would have nothing to eat! Others want to eat insects to stop world hunger, but we would need some good cooking lessons!"

"Yes, I would try them because I've never tried them before and I think they might make a nice topping for a curry!"

"Cover it in chocolate and I'll eat anything, at least once!"

"Yuck! Why would you want to put insects on pizzas! How would you know which insects are poisonous or not? However, if they are healthy and we HAD TO eat them, then we would!"

"I would eat insects because they look nice and crispy when they are cooked!"

"I would give it a try because you'll never know if you like it if you never try. Also it would be adventurous."

"I wouldn't eat bugs because they look disgusting and I'm a fussy eater!"

"I think that you should try something new. I think it is a good idea and I would give them a try."

"I would eat an insect if it was the last type of food on the planet but not as a regular meal."

"I don't think I would ever eat insects! If insects made it onto the school menu, I wouldn't want to have school dinners again."

"I think that you should always try something before you say it is disgusting. If you knew what went in sausages and burgers (some of them anyway) I think you would think that's disgusting too. So give anything a try!"

"Never ever in my life will I eat an insect. You don't know where it's been!"

"I hate insects of any sort. I can't see me eating them!"