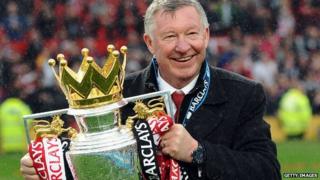 Sir Alex Ferguson marked his last match as manager of Manchester United at Old Trafford by lifting the Premier League trophy on behalf of his team.

An emotional Ferguson spoke to the crowd after the final whistle.

"Everyone at the club and you the fans have been the most fantastic experience of my life," he said.

"Thank you. I have been very fortunate to manage some of the greatest players in the country. These players have won the championship in fantastic fashion. Well done to them."

Ferguson retires after the club's last match of the season at West Brom.

He will be succeeded by Everton boss David Moyes, who is to take over on a six-year contract from 1 July.