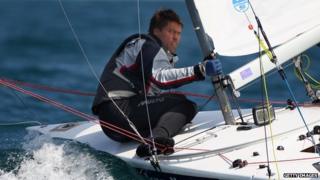 British gold medal-winning sailor Andrew Simpson has died after his boat tipped over during a practice session for the America's Cup in San Francisco.

Andrew Simpson - a double Olympic medallist - was one of an 11-man crew on board the Artemis Racing catamaran when it happened.

When the boat turned over he fell into the water and was drowned.

Mr Simpson won the Olympic Star class gold in Beijing in 2008 and silver in London in 2012. 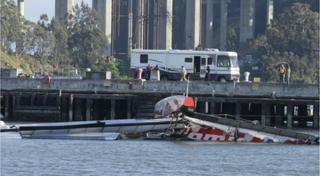 The Artemis Racing catamaran which tipped over.

John Derbyshire, performance director of the UK's Royal Yachting Association (RYA) said: "Andrew is someone I've worked closely with since the age of 16.

"He was a great talent and a key figure in our World Class Programme over many years culminating in his well-deserved Olympic success.

"He was a huge inspiration to others, both within the British Sailing Team and across the nation and our deepest sympathies go out to his family at this terrible time."

The British Olympic Association said in a statement: "We are devastated to hear about the tragic training accident in San Francisco which led to the loss Olympian Andrew Simpson's life.

"Andrew was a treasured and accomplished member of Team GB, both at the home Olympics in London 2012, where he won silver with childhood friend Iain Percy in the Star class, and at the Beijing 2008 Olympic Games, where he won the gold medal also sailing alongside Iain.

"Andrew's talent and humour was an inspiration to others and he will be sorely missed by the Olympic Family. Our heartfelt condolences are with Andrew's family, friends and fellow athletes during this very difficult time."