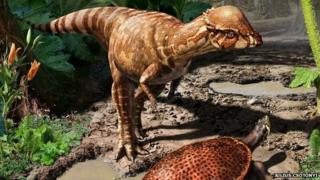 A new species of head-butting dinosaur has been discovered by scientists in Canada.

The Acrotholus audeti had a thick dome of bone at the top of its skull, which could have been used for fighting or just for decoration.

It was about the size of a large dog - pretty small compared to other dinosaurs we know.

It walked on two legs, ate plants and lived around 85 million years ago.

Scientists think it's the oldest boneheaded dinosaur ever found in North America, and possibly the world.

Not much is known about smaller dinosaurs - possibly because their more delicate bones are less likely to have survived over time.

But the experts who worked on this discovery reckon there are even more fossils of small dinosaurs out there waiting to be found.