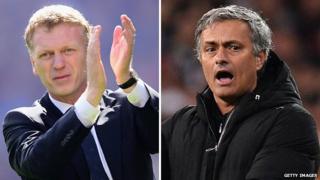 Sir Alex Ferguson is retiring as Manchester United manager at the end of the season. But who'll fill his shoes?

United confirmed on Wednesday morning that Sir Alex will step down after 26 years in charge.

United said in a statement: "The most successful manager in English football history will bow out after the West Bromwich Albion game on 19 May and join the football club board."

Now the question on everyone's lips is: Who could replace the best ever?

The favourite for the job. The Everton boss is the third longest-serving manager in the English game, behind Sir Alex and Arsene Wenger. He joined the Goodison Park side in 2002 and under him Everton qualified for the Champions League in 2005 and reached the FA Cup final in 2009. His contract with Everton runs out this summer.

The Special One, as he calls himself, has never made it a secret that he'd quite fancy the United manager's job - and there's been plenty of rumour in the media recently that he's ready to leave Real Madrid and return to the Premier League. He's thought to be the front runner for the Chelsea job (again) too.

The current manager of Borussia Dortmund has won back-to-back titles in the Bundesliga (Germany's version of the Premier League) and has taken his side to the 2013 Champions League final, thrashing Real Madrid in the semi-final. He's rightly regarded as one of European football's rising young stars.

The Norwegian is a former United legend, signed by Sir Alex, who made his name as a "super-sub" - he came off the bench to score the winner in the 1999 Champions League final against Bayern Munich. He had a spell as Manchester United reserve coach, and has been linked with the top jobs at Blackburn and Aston Villa but didn't take either - and is currently in Norway managing Molde.

A former Liverpool boss, currently interim manager at Chelsea but likely to be looking for a permanent job this summer. No, it's not very likely Rafa will get the job. But anything's possible in football...