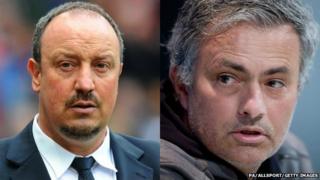 Chelsea interim boss Rafael Benitez has hinted that Jose Mourinho will be back at the Blues next season.

Benitez said on Tuesday: "The next year there will be another manager. I think everybody knows who will be here."

But when asked directly if he'll be replaced by the 'Special One', Benitez responded: "It's not my concern what will happen here next season, I'm just concentrating on doing my job."

Mourinho hinted of a return last week, saying: "I know in England I am loved."

He's currently managing Real Madrid, where his contract runs until 2016.

Mourinho managed Chelsea between 2004-7. He is their most successful manager to date - winning two Premier League titles, two Carling Cups and one FA Cup.