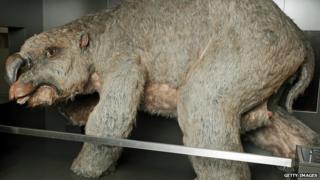 Gigantic animals that once roamed Australia were wiped out by climate change and not humans, say scientists.

For a long time scientists didn't know why these huge creatures had become extinct.

They included the Diprotodon - a marsupial the size of a rhino.

Now it's believed that most of these animals were gone as early as 50,000 years before the time humans are thought to have arrived.

Scientists doing the study at the University of New South Wales, also say the change in climate and the extinction of the animals was gradual, over tens, or hundreds of thousands of years.