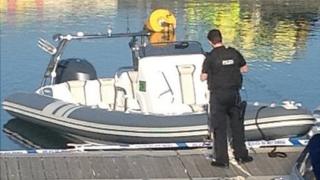 Police are trying to work out what caused a speedboat accident which killed a father and daughter off the coast of Cornwall.

Nick Milligan and his eight-year-old daughter died, and four other family members were injured, when they were thrown from their boat.

It continued to spin out of control until a local waterskiing instructor managed to jump on board and stop it.

Forensic experts have carried out a mechanical examination of the boat, which was owned by the family.