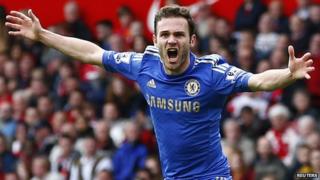 Chelsea are up to third in the Premier League after a 1-0 victory at Manchester United.

It means the Blues are a step closer to that all-important top four finish, which means a spot in the Champions League.

Juan Mata's late strike in the 87th minute went in the net off Phil Jones and the post.

Chelsea are one point ahead of fourth-placed Arsenal and three points in front of fifth-placed Tottenham.

Elsewhere, there was a goalless draw in the Merseyside derby between Liverpool and Everton.