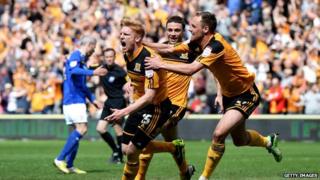 Hull City have been promoted from the Championship to the Premier League after a 2-2 draw with Cardiff City.

Their draw, and a defeat for rivals Watford on the final day, means the Tigers clinched second spot in the table and a place in the top flight next season.

Watford, Brighton, Crystal Palace and Leicester City will now battle it out in the playoffs for the final spot.