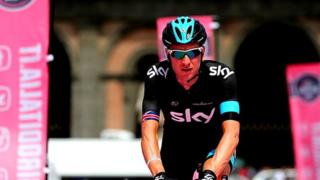 Wiggins became the first British winner of the Tour de France last year and he believes he is 'ready' to do the same in the Italian race.

He told BBC Sport he was confident of his chances in the three-week race, saying "I've improved from last year.

"In training for the Giro I've had to train to the demands of steeper climbs, which is more out of my comfort zone, but my climbing has improved a lot."

Wiggins is favourite to win the race but will be up against defending champion Ryder Hesjedal and Italy's Vincenzo Nibali, who won the traditional pre-race warm-up, the Giro del Trentino.

Wiggins said he wants to try and win the Giro and Tour double - last achieved in 1998.