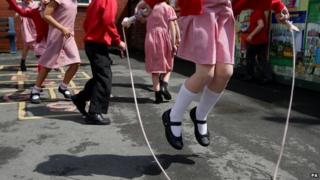 A headteacher has sparked a debate after he suggested having best friends should be 'banned', and kids should have lots of friends instead.

The teacher at a school in London, is reported to have said that he would be in favour of 'a policy which says we should have lots of good friends, not a best friend.' But the school hasn't put an official rule in place.

He says that best friendships can become possessive and that it is much easier for children to share friendships and have a wide range of good friends rather than obsessing too much about who their best friend is.

We what did you think. Is it better to have a group of friends or is it important that you have a best friend? Do you feel left out by others who are best friends?

"This is silly. Why should someone else decide whether we should have best friends or not? It's none of their business. When you're on the playground having break time, there is the clue in the name 'break' it is a time for children to relax, and be with whoever they want to be with!"

"I think the teacher has a point because you might upset someone by leaving them out but it's good to have a special friend too."

"I think that having best friends is better because you know them a lot and can trust them, also because they will always be at your side no matter what."

"I think that it should be our choice. Most people in my school have a group of friends and a BFF! You can always talk to your BFF when in need and if you need to tell them a secret. They are the people who really look out for you in life!"

"I think it's a good idea, but saying that 'best friends are banned' sounds a bit bossy and children wouldn't like it. I hate the idea of 'best friends' because it's horrible when someone says 'they're my best friend, but you're my second best friend.

"I don't have a best friend but I don't think there should be a ban for best friends."

"This rule is ridiculous! Children should have the right and freedom to choose whether they want a group of friends or a best friend - everyone is different. Having a teacher tell you that you can't have a best friend anymore will really upset some kids."

"I think you should only have good friends cause it turns into a fight when a person has to choose one best friend."

"I think it is a stupid rule. What if people don't like being in big groups? Yeah, others have friends but don't you think that we have a right to choose."

"I think it is good to have a best friend so that loads of people don't know your deepest darkest secrets! Banning BFF's is just weird!

"No way! This news is horrendous, it's not about how popular you are because at the end of the day your "popular friends" will never be there for you but your real best friends will always be by your side. I would much, much rather a best friend than any "fake friends".

"I think that having a best friend is a good thing but it is great to be able to play and talk to other people as well!

"I think that you should have friends and best friends. It's not other people's place to decide whether you can or can't have a variety of friends."

"Yes, best friends can easily break up because of the issue of 'NO, you can only play with me!' or 'Don't play with her.' etc. A group of friends might be a problem too depending on who is leading the group, if a person gets rejected by the group it will make them feel bad."

"I think that is really unfair, children should be happy when they go to school with their friends nobody should stop them, it's their life no one should rule it!"

"I think its important to have lots of friends because every one of my friends is special."