Escaped raccoon on the loose in Scotland 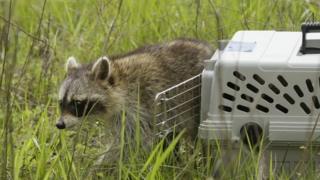 Police are on the hunt for an unusual suspect... an escaped raccoon! The animal went on the run after a storm damaged its home.

It is one of three raccoons that escaped from the Auchingarrich Wildlife Centre during bad weather in January. The other two have already been found.

Officers say the animal - which is the size of a cat - isn't dangerous but could give a nasty bite if cornered.

Raccoons are nocturnal and tend to hide during the day.