IBM scientists used carbon atoms as stars in their film 'A Boy and his Atom' which is being called the world's smallest movie.

Researchers moved the tiny particles around on a copper plate using a special kind of microscope.

They then took photographs of them arranged in different pictures which were edited into the short film.

It would take about 1,000 of the frames of the film laid side by side to be the width of a single human hair. 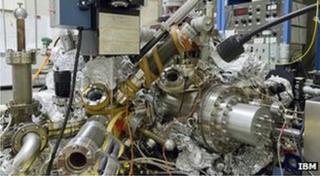 IBM
This machine is the movie studio for the world's smallest film.

Why they made the film

It took four scientists two weeks of 18-hour days to make the film and demonstrates how they can control the smallest building blocks of life.

The film shows off IBM's research into next-generation data storage based on single atoms but is also designed to inspire people and get them talking.

"The movie is really a conversation-starter to get kids and other people talking about -and excited about - math, science and technology."