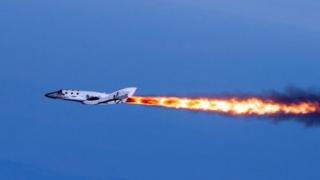 Richard Branson's dreams of sending tourists up to space are a step closer after SpaceShipTwo (SS2) made its first powered flight.

The vehicle was dropped from a carrier aircraft high above the Mojave Desert in California before its rocket engines were lit.

The engines only burned for 15 seconds, but this is the first time the SS2 has flown solo.

After shutting down its motor, the vehicle then glided back to the Mojave runway.

On Twitter, Virgin Galactic said: "For the 1st time ever, SS2 has lit her rocket engine in flight! A major milestone in human spaceflight."

The team hoped the first real passenger flights would take place in 2016, but some reports suggest this may be too soon.