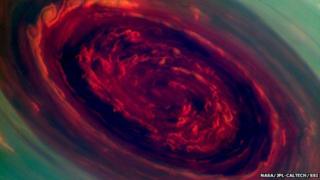 An enormous storm raging on the planet Saturn has been captured on camera.

The hurricane, thought to measure 2,000km across its middle, is big enough to cover the UK 12 times over.

A spacecraft called Cassini, which arrived at Saturn in 2004, took this striking snap of the storm from a height of 420.000km.

Andrew Ingersoll, a member of the Cassini team based in California, US, said: "We did a double take when we saw this vortex because it looks so much like a hurricane on Earth."

The first time a hurricane was seen on another planet was in 2006.