Chat: School wants kids to have a 'licence' to ride scooters 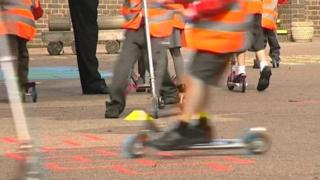 A school has sparked a debate after saying kids must have a licence to ride their scooters to school.

Pupils at a primary school in West Sussex were told they would have to take a safety test before they are allowed to scoot to classes.

Some parents said the scheme was 'ridiculous' but others said it was a good idea for the kids to be taught road-sense.

We want to know what you think? Is it a good idea to have a road safety test if you want to ride your scooter to school?

"I think that having a license for riding your scooter would be a good idea because it will prove that you are safe and able to ride carefully on your scooter independently on your way to school."

"I have been scooting to school for about a year and I find it extremely safe. Scooting is also an exercise and it shouldn't be classed as 'Unsafe'."

"Schools should concentrate on teaching children the basics and stop sticking their noses into things that happen out of school!

"I think this is the most ridiculous thing I have ever heard. Honestly! Scooters are supposed to be fun, but if little kids are worried about having to get a licence then it will put them off!"

"I think having a licence to ride a scooter is ridiculous because lots of children have scooters so they would have to take their scooters off them. Are we going to need a license to walk too? "

"I think that it is ridiculous that children should have a licence because a scooter is not dangerous at all. The road safety test is ok as every child should know how to be safe on the streets."

"I think everyone should have a test. Why should people get tested on bikes and not scooters? For some schools it's not good to take scooters to school anyway because mine was stolen. I think anyone who wants to ride a scooter should have a test."

"I think that it is ridiculous! Scooting is like cycling, but on a smaller, more stable vehicle. Some schools take the cycling proficiency test, so maybe there should be a scooter version of that. It shouldn't be compulsory and you could still scoot without taking the test."

"Kids should not have a licence because scooting is fun. Safety is important but a licence is too far."

"We think that the idea is ridiculous because you do not have to have a licence to ride your bike to school. Also, a scooter goes slower than a bike and is smaller and more stable.

"We think there should be tests but only for children under 7, as we think that older children are sensible enough to know the rules of the road."