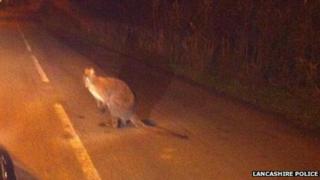 Police in Lancashire have been looking for a mystery marsupial after people reported seeing a jumping animal on the loose.

Officers heard about a kangaroo crossing a the road while they were running a rural crime operation in the area at the weekend.

Police were shown a photo of the animal but were not convinced it was real at first.

They are now investigating where the animal was from and who owned it.

A police spokesman said there were suggestions that the animal was not a kangaroo, but a wallaby, which may have escaped from a nearby farm.

•Kangaroos and wallabies are marsupials which are closely related, though adult kangaroos are larger than wallabies.

•They can be identified from their teeth, which are different as kangaroos mainly eat grass while wallabies mostly eat leaves.

•They are native to Australia but been introduced in the UK in parks, zoos and farms.