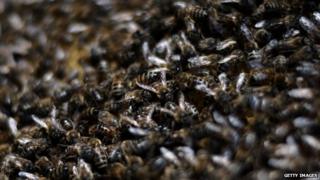 European politicians have voted for a two year ban on pesticides which some people think are harming bees.

The chemicals called Neonicotinoids are used to keep bugs away from plants and are used in many European countries.

Although some people say there isn't enough evidence to prove the chemicals are harmful to the insects there is great concern about the collapse of bee populations.

Fifteen countries voted in favour of a ban but eight including Britain did not want one. As there was no majority for a full ban the European Commission decided the pesticides should be restricted to crops not attractive to bees for two years from December.

"Europe is taking science seriously and must now put the full ban in place, to give bees the breathing space they need."

Farmer Edward Houghton says that science has not proved that the chemicals are harmful to bees and that the ban could hurt the them in a different way.

For example, if farmers aren't allowed to use the pesticide on crops like oil seed rape farmers won't plant it which will mean less pollen for the bees to feed on.

What exactly are Neonicotinoids?