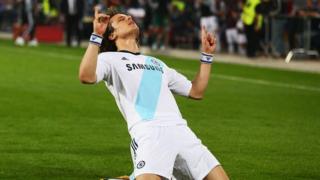 David Luiz scored an injury-time free-kick to give Chelsea the lead after their Europa League semi-final first leg against Basel.

Frank Lampard made it 1-0 to Chelsea after just 11 minutes.

But Basel's Fabian Schar equalised from the spot with three minutes left to play, after Cesar Azpilicueta was penalised for a challenge on Valentin Stocker.

Chelsea are attempting to become the first team to win the Champions League and then the Europa League in successive years.

The Blues manager Rafael Benitez has warned they still have plenty of work to do if they're to beat Basel again at Stamford Bridge on 2 May.

"We must concentrate and have no over-confidence for the next game," he said.