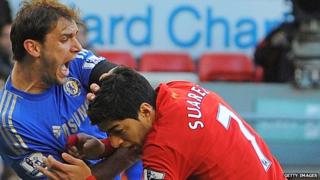 Liverpool striker Luis Suarez has been banned for 10 games by the Football Association for biting Chelsea's Branislav Ivanovic.

The Reds top scorer did apologise to the Chelsea defender after the match, but that does not seem to have had an impact on the length of the ban.

Liverpool, who have already fined the Uruguay international, have until noon on Friday to appeal the decision.

The ban means that Suarez will miss Liverpool's final four games of this season, and the first six games of 2013-14.

Liverpool had felt a three-match ban would have been fair and bosses at the club have said they surprised at the FA's decision.

The club's managing director Ian Ayre said: "Both the club and player are shocked and disappointed at the severity of today's Independent Regulatory Commission decision."

It is not the first time Suarez has bitten someone.

In 2010 he was banned for seven games when he was at Ajax after biting PSV Eindhoven midfielder Otman Bakkal's shoulder during a match.

While playing at Liverpool, Suarez was also given an eight-match ban and £40,000 fine by the FA for racially abusing Manchester United left-back Patrice Evra in December 2011.