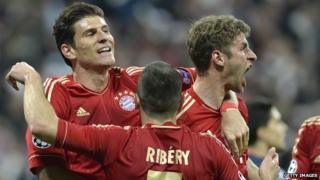 Bayern Munich thrashed Barcelona 4-0 in the first leg of their Champions League semi-final.

The German champions produced a fantastic performance, playing with a power and pace that blew the Spanish side away.

It was Barca's worst defeat in Europe since they were beaten by the same scoreline by Dynamo Kiev in 1997.

No team has ever lost the first leg of a European Cup tie by four or more goals and progressed to the next round.

Former Chelsea winger Arjen Robben was on top form and added a third, before Mueller got his second near the end.

World Player of the Year Lionel Messi was back in the Barcelona side after an injury, but didn't look fully fit. 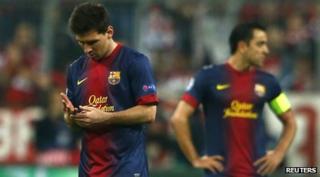 Barcelona is that they have won 15 of their 16 La Liga games at the Camp Nou.

Barcelona defender Gerard Pique admitted it was "almost impossible" for his side to reach the final.

"They've been faster, stronger and played the better football," said Pique. "It's almost impossible for us."