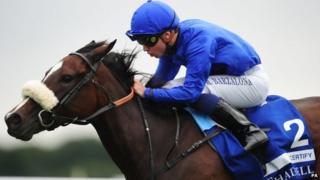 It's been called one of the biggest doping scandals in British horse racing history.

Eleven horses from the Godolphin stable, owned by Dubai ruler Sheikh Mohammed, were found to have steroids in their bodies when they were tested.

The drugs are not allowed because they give the animals an unfair advantage in races.

He'll have to attend a special inquiry by the people in charge of the sport.

He went on: "Because the horses involved were not racing at the time, I did not realise that what I was doing was in breach of the rules of racing.

The 11 horses together have won more than £1.3m worth of prize money, and include unbeaten Certify, who will not be allowed to run in next month's 1,000 Guineas at Newmarket.

"This is a dark day for Godolphin," said stable manager Simon Crisford. "We are all shocked by what has happened.

"His Highness Sheikh Mohammed was absolutely appalled when he was told and this is completely unacceptable to him."