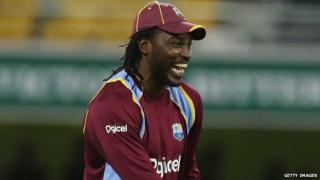 Bangalore scored 263-5 - the highest team score in the Twenty20 format.

The team's score beats the previous best of 260, set by Sri Lanka against Kenya in Johannesburg in September 2007.

Gayle told ITV4: "I'm lost for words. It was just one of those days. It's a good wicket and I started well.

"All I had for breakfast this morning was a plain omelette, two pancakes and a hot chocolate."