Wimbledon's Number One Court to get retractable roof 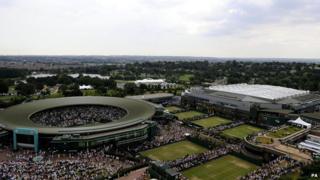 Wimbledon's Number One Court will have a retractable roof by 2019, the All England Club have revealed.

Wimbledon first broke with tradition by installing a roof on Centre Court in 2009, so play can continue even during the often wet British summer weather.

The All England Club also announced a 40% increase in prize money for this year's Championships.

The total prize money pot, shared amongst the competitors, will be £22.6m at this year's event, up by £6.5m on last year.

Philip Brook, head of the Wimbledon Championships, said: "For the players, it is a deep appreciation of the demanding nature of professional tennis and the top-quality entertainment they bring, while for The Championships it is about giving all our visitors the finest stage on which to enjoy Wimbledon."