'Too much junk in space', say scientists 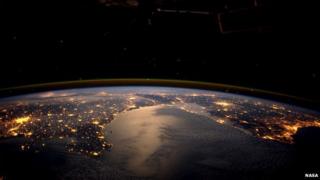 Scientists say there's too much space junk that urgently needs cleaning up.

A new study about space debris says a huge number of abandoned satellites and rockets floating above the Earth will lead to 'catastrophic' collisions.

There's only been a few collisions so far but that's expected to get worse over the next 200 years.

Experts are looking at ways to remove some of the junk up there. One idea to catch old rocket bodies and satellites, is being developed in the UK.

It would involve firing a harpoon at the target from close range, the device would then tug the junk downwards, to burn up in the atmosphere.

A huge cloud of space junk

The study came from the space agencies of Europe, America, Italy, the UK, Japan and India. They all contributed to the latest research, each one using their own experts and research methods to try and predict how space will look in the future.

There are around 20,000 man-made objects in orbit that are being monitored. About two-thirds of those are in low-Earth orbit - which is where most space missions to observe the Earth tend to operate.

These are just the big, easy-to-see items, however. Moving around unseen are an estimated 500,000 particles ranging in size between 1-10cm across, and perhaps tens of millions of other particles smaller than 1cm. These could be very dangerous for astronauts too.

Joe finds out how satellites can add to space junk