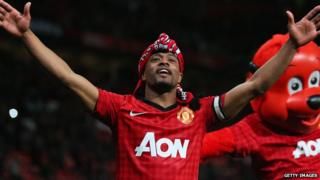 The win sealed United's 20th league title, their 13th in the Premier League.

Dutchman Robin Van Persie scored a first half hat-trick taking him to 24 league goals this season.

United could finish with a record total of 96 points should they win their remaining four games.

But if there were any nerves, they soon went out of the window when Van Persie opened the scoring after 83 seconds. 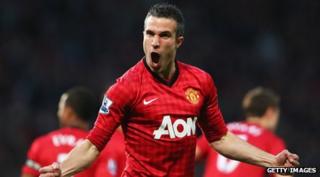 The striker then added a second with a fantastic volley from outside the box, before wrapping up all three points, and the title, with a close range finish before the break.

The Red Devils could have scored even more in the second half but Rooney, Welbeck and Kagawa all wasted good chances.

In the end though it didn't matter and Ferguson hugged his players on the pitch at the final whistle.

But as United celebrated with a lap of honour, the defeat left Aston Villa just three points above the relegation zone with four games to play.