Prince Harry will race to South Pole for charity 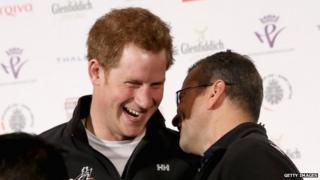 Prince Harry will take part in a race to the South Pole with a team of wounded British servicemen and women.

He said today that he will join the 208-mile (335km) Walking With The Wounded South Pole Allied Challenge in November and December.

Prince Harry took part in the charity's North Pole trek in 2011 and is already patron of the Antarctica expedition.

He said the aim of the event was to "meet a challenge head-on and overcome it and inspire others to do the same."

The Walking With The Wounded charity helps wounded servicemen and women to find jobs after leaving the services.

Prince Harry didn't take part in a bid by the charity to scale Mount Everest last year because he was working in the Army. He pulled out early from the successful North Pole expedition to attend his brother's wedding.

He said of the South Pole race: "The format may be different. The scale is certainly different.

"But the aim remains the same - to enable our wounded to do what they and all other servicemen and women do better than anyone else I know - meet a challenge head-on and overcome it and inspire others to do the same.

"Ladies and gentlemen, these men and women have given their all in the cause of freedom, in our cause.

"That they should once again step into the breach - this time facing down the extreme physical and mental challenges of trekking to the South Pole - just underlines their remarkable qualities."

And he gave a jokey challenge to the other teams: "It just remains for me to say to Soldier On Canada, Soldiers To Summits from the US and Soldier On Australia - welcome to the party.

"As a member of the British team, I will have a brew ready for you when you join us at the Pole."