The Wanted's Nathan Sykes out of vocal cord surgery 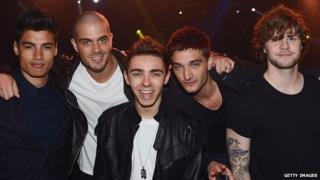 Nathan with his bandmates last month

The Wanted's Nathan Sykes is out of surgery - and "overwhelmed" by the support he's had from his fans.

He had specialist surgery on Thursday, his 20th birthday, to fix a vocal cord haemorrhage - the same problem Adele had in 2011.

Nathan tweeted: "Out of surgery... what a way to spend my birthday!"

He also wrote: "I have been completely overwhelmed by all of the love, support and birthday wishes from you guys. You are all amazing!!"

The Wanted's manager Scooter Braun posted: "Happy to hear Nathan is out of surgery and getting rest."

Nathan won't be performing with the band for the time being, as he recovers from his operation.

A statement from the band's management before the surgery said: "The priority for Nathan, his label and management is that he is given time to recover and receive the best treatment possible."

The band were due to be recording their third studio album set for release later this year.

The Wanted: 'We can't compete with 1D'